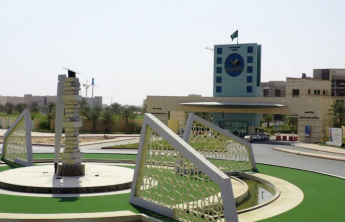 Represented by the Deanship of Admission and Registration, Vice-Rectorate Educational and Academic Affairs at PSAU announced the opening of admission to the human medicine major for female students at the College of Medicine in Al-Kharj for the academic year 1443 AH, through the admission portal for female students.

The official spokesman at the university, Dr. Issa Al-Dosari explained that admission to the College of Human Medicine for female students is after the student has passed the preparatory year for health specialties for the academic year 1443 AH. He added the development of such qualitative specializations is part of the university's plans to expand its academic programs and specializations that keep pace with the needs of the labor market.

Dr.  Al-Dosari said that the colleges available to female students after successfully passing the preparatory year program for health colleges are the newly created Human Medicine in Al-Kharj, the College of Pharmacy in Al-Kharj and the Applied Medical Sciences in Al-Kharj - Nursing Sciences, and the unified program in the specializations of tomography, medical laboratory sciences and physical therapy. 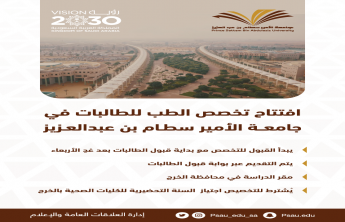 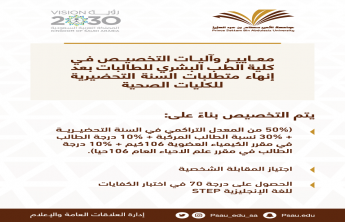